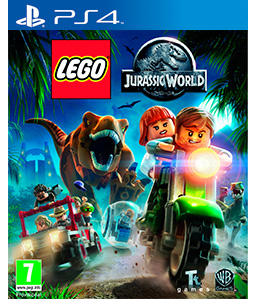 developed by Traveller's Tales and published by Warner Bros. Interactive.
Rate it
Also on

There are two things in life you can count on: There will always be another Lego game, and it will probably come with less bugs than the previous one. And that's why we have LEGO Jurassic World, a not-quite-but-maybe-a-little movie tie-in that launched alongside the movie. You're not only treated to running around with a minifig of Chris Pratt though, because Traveller's Tale has generously worked their magic on the three previous movies as well. What you get are 4 stories, 4 hubs and the usual obscene amount of collectibles that you're used to from previous Lego Games. The hubs vary in size, but it's obvious that the latest movie got the most love during development. Not only is the hub bigger and more interesting, but the voice assets taken from the movie are of much better quality than what you get from the other three. Whereas Jurassic World is crystal clear, what you hear elsewhere is reminiscent to that of a muddled conversation between two cans and a string at times. That doesn't take away from the fun of playing these games though, and contrary to Lego Batman 3 and to a degree Lego Marvel Super Heroes, this one comes with a breath of fresh air I've longed for in a Lego game for a time now. The change of color palette and setting makes this game very easy and tempting to get into. Not a whole lot is done to the mechanics from prior games, but this time around you get to be dinosaurs alongside the usual 100 characters you can unlock during your adventures. They mostly work as heavy characters when you need something crushed, pulled or occasionally covered with acid. It's a fun distraction compared to the regular cast, particularly when you tower over the whole map as a Brachiosaurus. Why I can't fly above the hub as a Dimorphodon is probably to avoid glitching out the game, but I can't help but feel this is a missed opportunity. Also, you get to dig in poo which is important to mention. Why do you hate my friends?

The game plays like you expect it to. Story mode contains levels packed with secrets you can't access until you've unlocked certain characters, but there is a slight increase in chase levels. They look pretty great, but boy are they a hassle when you try to collect minikits. It also looks pretty dazzling with the sharp and highly detailed graphics you've become accustomed to over the past few games. I haven't compared them, but I can't help but feel that it gets a little bit sharper, a little bit better with each new game. Maybe even more important is the fact that I could 100% this game without ever having it crash or having a bug prevent my progress. You will occasionally get stuck in the geometry, but that's almost every game these days and usually don't pose a huge problem as you can either crush something or just switch to the second character. Perhaps the least surprising but still baffling fact is the lack of online co-op yet again. The finely tuned local co-op is of course there, but it's hard to fathom why I can't destroy everything with a friend not sitting next to me. With Lego Jurassic World you know what to expect. It's a tried-and-true formula which means it's usually heaps of fun if you're into these games. This time though the compact hubs and rather short story levels result in an experience that feels hasty and a little bit lackluster. The addition of dinosaurs doesn't quite make up for it, but they are pretty great to play and I have no problem recommending this if you're a fan of the Lego Games or Jurassic Park.

Dinosaurs are cool, but Lego Jurassic World is still lacking in some spots

By Bård A. Johnsen
More from Traveller's Tales
You might also enjoy