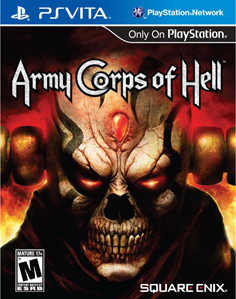 Defeated in battle, the King of Hell is stripped of his powers and is banished from his throne. Burned to a meager corpse, the dethroned king uses the last of his strength to take command of a corps of weak-minded goblins. He commands his ragtag army of bloodthirsty goblins as he fights through Hell to reclaim his throne, destroying his enemies and looting their corpses for equipment along the way.

Army Corps of Hell brings a new level of vicious combat, dark humor and lightning-quick action to the PS Vita. Players control an army of a hundred goblin soldiers, with various classes and abilities to defeat a host of enemies in order to reclaim the King of Hell's throne. In Army Corps of Hell, players can take full advantage of the PS Vita system's unique control features to experience war like never before!
Rate it
Platform:

Action
Missing or erroneous information? Shout at us on Twitter.