Hell has frozen over.

Climate change. There is hardly a topic that is more talked about than the future of our climate. We’re bombarded with scenarios of doom, while others try to debunk those ill tidings. Whatever your stance on this debate, there is hardly any room for middle-ground You either belong to the ‘doom-bringers’, or to the ‘climate deniers’.

It is in this heated debate, that 11-bit launches its latest title: Frostpunk. And while they don’t take a position in the climate change debate itself, they do paint a dark picture of what could happen if our world would take a nose-dive into the cold.

Frostpunk takes place in an alternate timeline in late 19th century England, where the unspeakable has actually happened: Following a volcanic outburst a global winter has set in, and temperatures have collapsed. As a result of that, city-life in London has come to a halt while everything gets permanently covered in a meters-thick blanket of snow and ice. As life in London becomes increasingly more difficult, large populations decide to leave the city, hoping to find refuge elsewhere.

They end up in Northern England where huge generators have been built, which can be run using coal. In order to survive the cold, the refugees need to build a new city around one of these generators. It is your job, as a leader of your group of refugees, to make sure your city survives, and if possible, thrive against the ever-increasing environmental odds. 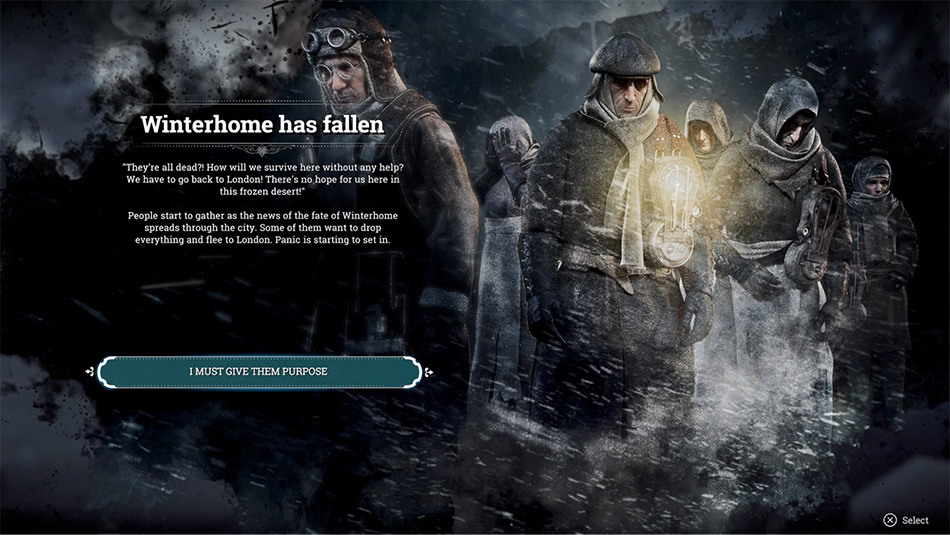 Frostpunk consists of one main story line in which you need to manage your newly built city on a day-to-day basis, and four alternate scenarios in which you are dealing with a specific task. Those tasks range from dealing with a sheer endless stream of refugees arriving at your camp, being trusted to take care of a set of arks containing the seeds of the world in the hope of being able to repopulate earth once the winter comes to an end, or a scenario where you’re handed control over a very poorly led city almost out of resources with people rioting in the streets. In the latter scenario, it’s your job to get things under control before everything is destroyed and everyone is either dead or starving.

Back to the main scenario. It starts with you and your group of refugees arriving at one of the generators, which is abandoned and stone-cold. Since no one can survive for very long in these constantly freezing temperatures (-20 Celsius is considered warm), warmth is your top-most priority. Your first job is to get the generator working again. Fortunately, there are patches of coal nearby which can be collected by your refugees. Before you know it, the generator is starting up, bellowing a black plume of smoke (oh well, the environment is wasted already anyway), but more importantly, radiating heat. 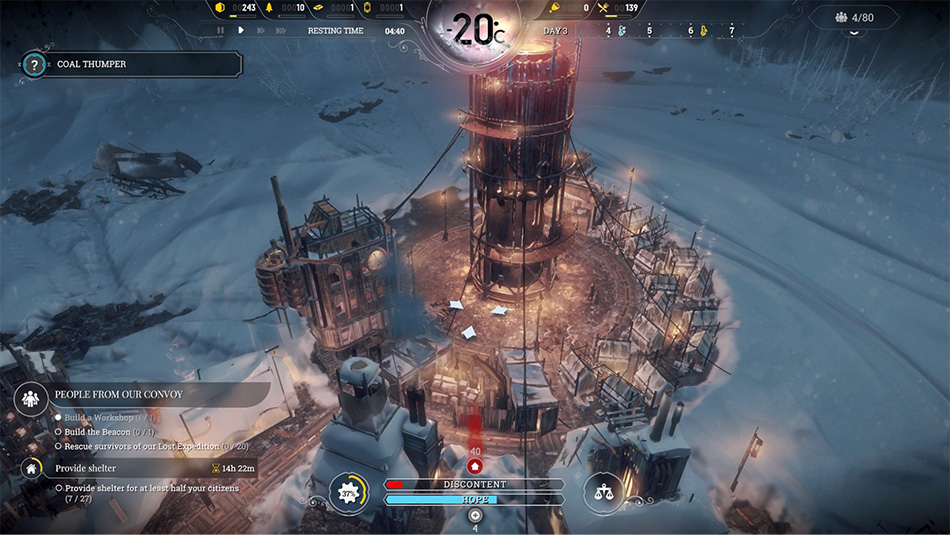 Your next job is to provide housing for your refugees. You order tents to be erected next to the generator before night falls again and the temperature drops even further. Soon you have a small community of tents surrounding the generator, and things are looking a little less bleak. Or so you think. Before you can sit back and watch your people walking around the generator, you’re warned of new tasks to complete. First of all, people need food. And food doesn’t quite grow on trees with everything covered in snow.

You’re going to need to facilitate hunters and a cookhouse in order to provide raw food and prepare edible rations. Before you can finish those tasks, someone breaks a leg or becomes ill, or get frostbite, and needs attention. This in turn urges you to build hospitals. However, in order to do that … well, you get the point. There is always something urgent to do and never enough time or resources to do it. You’re always faced with seemingly insurmountable problems, and the tiniest mistake can (and probably will) lead to the sudden death of one or more of your people. 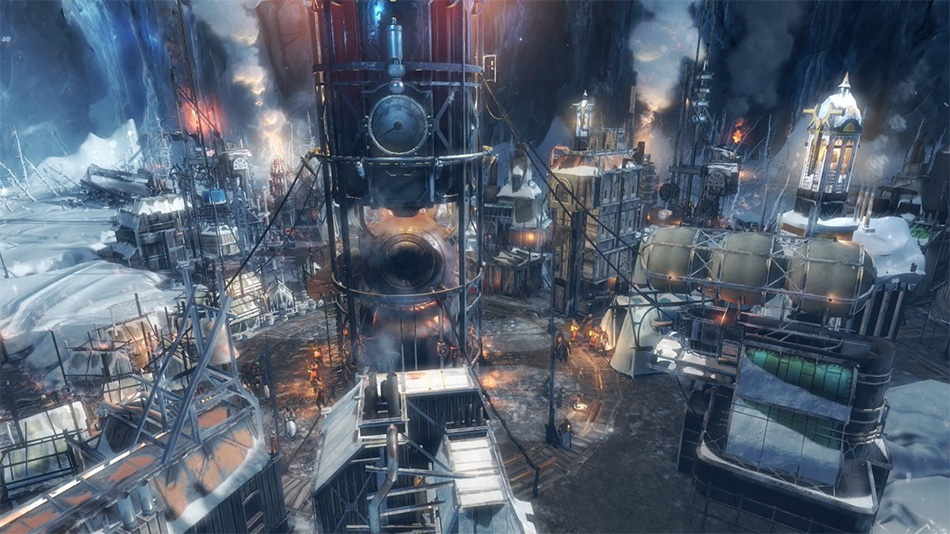 It’s a tough world and you’re constantly forced to make even tougher decisions. For instance, take that person with the broken leg. You can decide to leave him to it, but chances are that his leg will get infected, and maybe he’ll even die. Or, you can take drastic measures and have the leg amputated. You’d save the man’s life, but he would be far less effective as a worker. You need all the manpower you can find.

Talking about manpower, people are used to working in regular shifts. They are willing to work a bit longer than they used to, but standard working days run from 08:00 to 18:00, after which, all work is halted, and your people return to their tents. This of course stalls the resources gathering. Of course this does not apply to the resource usage. The generator (and steam hubs you can create later on in the game) continue to use coal around the clock, quickly depleting your stock and eventually leading to your generator shutting down if you run out.

This leads to even more tough decisions. Will you risk deaths by letting the generator shut down, and therefore everybody freeze to death, or will you enforce longer working hours, or even emergency shifts of up to 24 hours? Either way, you’re bound to lose both trust and credibility within your group. People will become dissatisfied in your leadership, or even lose hope of ever making it out alive. If hope falls to zero, or discontent reaches 100%, you’re faced with a leadership crisis. You’ll get a short window of time (usually two in-game days) to set things straight, or you’ll be banned from the city for mismanagement. Did I already mention it’s a harsh, cruel world? 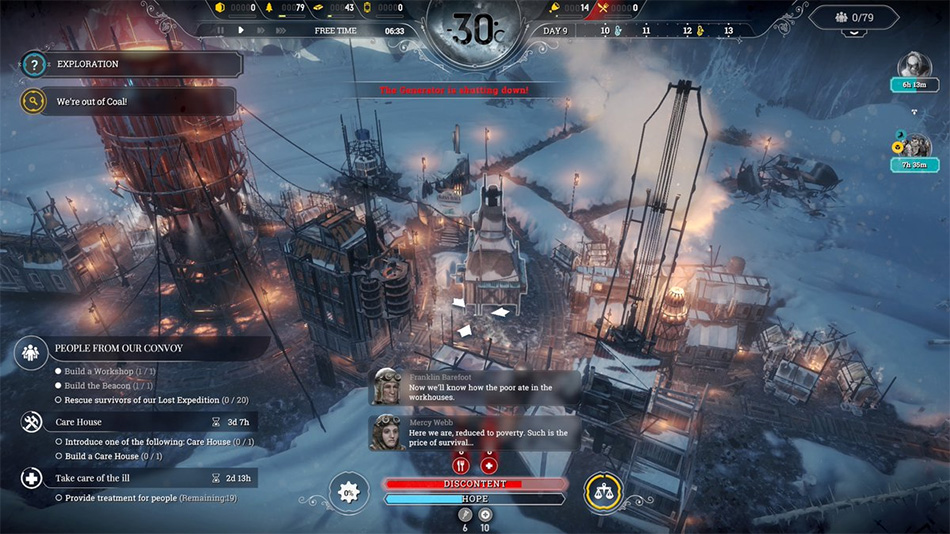 With your basic needs covered, it’s time to think about expanding beyond the icy walls that surround your generator. You can build a beacon which allows you to see over the edge, and send out scouts to look for resources and other survivors. This basically adds a whole different playing area, as these scouts can be directed from location to location, while you keep managing things in the city.

Every time the scouts arrive at a location, you can have them explore that location, and sometimes you’re faced with a choice. If you find goods or people, do you bring them back to camp, or do you move on? You may find people, but they may not be safe (yet). Do you liberate them, by facing their threat, risking your own scouts, or do you move on to live another day?

The game is full of these difficult, tough decisions, and all come with their own disadvantages. Will you let your children work? How will you treat the dead or sick? When there is a shortage of food, will you make soup, or add sawdust to the meals? There never seems to be a ‘right’ answer, but it’s you the people turn to to make these decisions.

If you’re a perfectionist like I am, you’ll restart this game many, many times after a few in-game days, because you made a slight error and found yourself in a situation where you ran out of one of your resources, making things spiral out of control. After yet another restart, you come to the realization that perfection is simply not possible in this game, and that this is quite probably a deliberate design choice.

You’re not expected to make a perfect world, you’re expected to fail. Or at least, constantly balance on the brink of failure. Once you reach this conclusion you start playing this game in a totally different way. You have to come to terms that someone will lose his leg, or will have to spend the night in the freezing cold. Factories will shut down because there is no more wood, and the hospitals will be full because everybody constantly gets ill.

It’s at this point that you really start to see what 11-bit is trying to achieve with Frostpunk: it wants you to feel what those hunkering down around that generator are feeling. And no, this world is not perfect, far from it. It’s quite literally a matter of survival. Beautiful survival, the screenshots accompanying this review will vouch for that. You can really get up close and personal with your fellow refugees, you can see them wade through the snow when you send them out to collect goods. 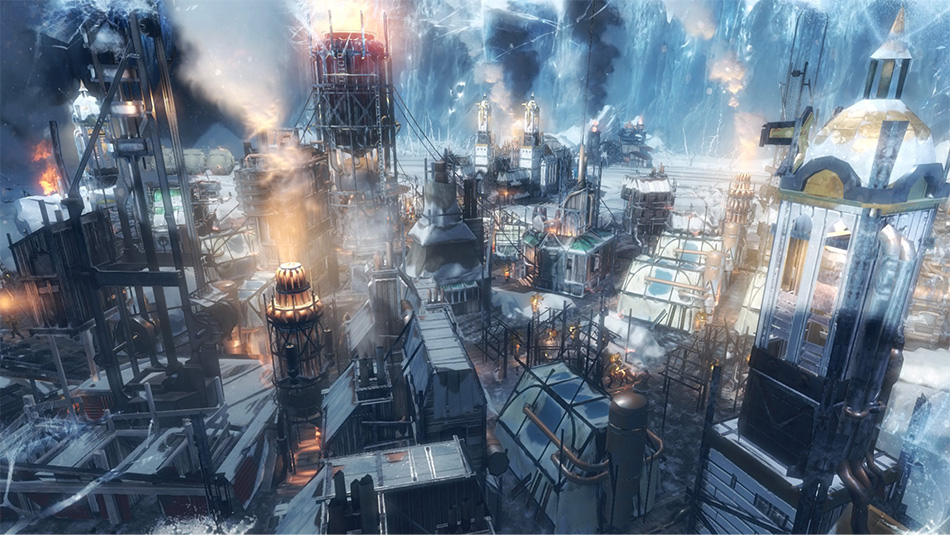 The generator, the fires and all the machinery look awesome from any viewing distance, and you can see the snow melt when you expand your city with additional steam hubs. The music is complementary to what happens on the screen: very much in the background, ominous but supportive of the grave situation you find yourself in.

Frostpunk is definitely a humbling experience. At first, it appears you be just another city-builder like so many out there. But Frostpunk is so much more. This is survival of the toughest. It will teach you to accept that not all choices have a good or bad option, sometimes in life you need to choose between several bad choices. The game is not unfair; you’re thrown into an unfair situation, and you’ll have to make the best of it. Trying to make it through yet another night.

And once you made it through the worst of it, the game has four more scenarios to throw at you, which totally change the way to play. One playing session of Frostpunk will easily eat up several evenings of playtime to see your community through the cold, only to start up yet another session to see if you can do any better next time. 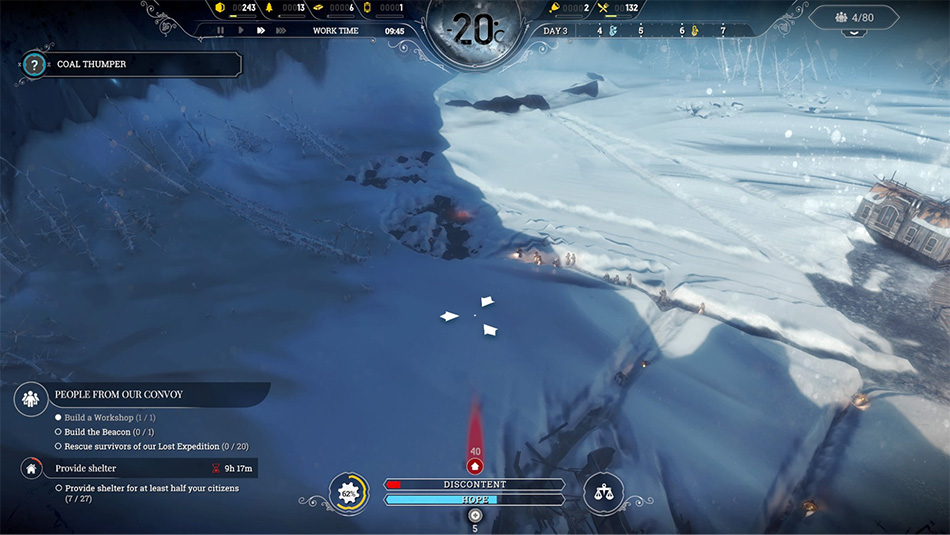 Frostpunk looks awesome, depicting its small world in great detail, adding yet another layer of immersion when you see your people wandering through the snow, working and occasionally relaxing. It’s not for the faint-of-hearts, but for those who dare, it is extremely rewarding.
Frostpunk is highly recommended to those who dare face the odds, and enjoy a game where your choices really do matter. And boy, do they matter.

Frostpunk was first launched on PC/Steam in 2018, and is releasing on Playstation 4 and XBox on 11th October 2019, followed by a retail-release the week after.

Highly rewarding, but not a game for the faint of heart

This copy was provided by 11 bit studios. The review is written by Chris Boers, you can find him on Twitter and the Official PlayStation Forums.